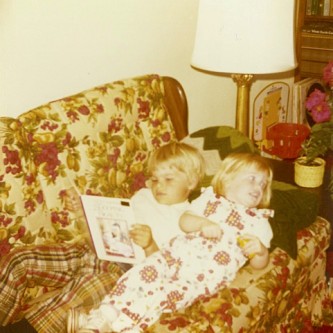 Reading to my sister, ages 5 and 2. It’s a wonder she could hear me over the sound of my pants.

My love for adventure fiction began with Robert Louis Stevenson’s Treasure Island, one of many books my mother read to my sister and me at bedtime. There were pirates and buried treasure, and a kid in the middle of it all. And there was the puzzle of Long John Silver: his affection for Jim, and his betrayal of him. How could both be true?

Reading on my own soon followed, and it was The Lion, the Witch, and the Wardrobe that taught me that adventure could be delicious when embellished by fantasy. In rapid succession I read books by authors like Susan Cooper, J.R.R. Tolkien, Ursula K. LeGuin, Edward Eager, Anne McCaffrey, Lloyd Alexander, Patricia McKillip, and Madeleine L’Engle. Later would come Louis Sachar, Robin McKinley, Robert Cormier, Megan Whalen Turner, Kenneth Oppel, Katherine Paterson, and Monica Furlong.

In high school I had a glimpse of what it means to be an editor. A friend asked me to read his college essay. I wasn’t sure whether I’d be able to help him; I’d never been asked to critique something before. I was surprised when I discovered I could see past the words to what my friend was trying to do with the piece, and, perceiving that, make recommendations about how he might better accomplish his goal. My friend’s earnest appreciation was a revelation—I’d had a real and positive impact on his work.

After similar experiences helping friends in college, I decided to marry my eye and ear for writing with my love of adventure and fantasy by becoming an editor in the children’s division at Random House. For more than twenty years, I read manuscripts on submission as well as published middle-grade and YA novels. I worked with dozens of talented writers, honing my skills all the while. My last six years with the company, I served as my imprint’s director of fiction, overseeing other editors’ acquisitions and managing the department’s list of novels.

Unfortunately, at big publishing houses today, editors spend more time answering email and going to meetings than they do editing. So when my first child was born, I left the corporate world, not only to be with my family but also to devote my working hours to my beloved vocation, the art and craft of editing. I’ve never looked back.